Coleus in the garden and at home

Home » Plants » Garden Plants » Coleus in the garden and at home 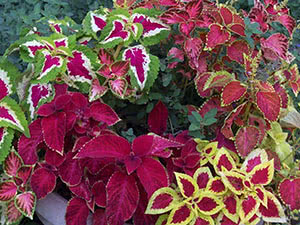 Coleus resembles both a croton and a begonia with its bright, variegated leaves. It is a charming and not at all capricious plant, which needs minimal care.

Some may think that the coleus is simple, but this impression is misleading: the plant has a strong character and powerful energy potential.

An interesting fact: on the surface of the leaves of the coleus there are tubercles that work like lenses: reflecting the light, they make the color of the leaf plates brighter and richer.

You can learn from our article on how to:

Planting and caring for the coleus

Read more about growing coleus below

Coleus spp. are a member of the Elmaceae, or Sponges, family, which has over 150 species. The plant name is derived from the Greek word “kleos”, meaning “case”. Homeland Coleus plant – the tropical forests of Asia and Africa. Among amateur flower growers, the coleus is known as the “poor man’s croton” because its variegated leaves resemble those of the croton, only looking simpler, and the “dumpy plant” – well, this is because many of them have not seen new varieties of coleus, allowing it to compete today not only with the croton, but with other expensive popular plants as well. The main advantage of the coleus, besides its variegated beauty, is its ease of care.

The stems of the coleus are ribbed, tetrahedral, and woody at the base. Leaves are pubescent, heart-shaped, opposite, dentate, sometimes small, but in some species they reach a length of 15 cm. Stems and leaves of natural species of plants reminiscent of nettles, so the people and got the nickname “nettle. The coloring of the leaves – all kinds of combinations of green, maroon, yellow and red. Small blue or purple flowers are in spike-like inflorescences.

Florists are not particularly interested in the flowering of decorative leaf coleus – there is nothing remarkable in its flowers. Cultivate these species of coleus for the sake of the amazing leaves, although there are also beautifully flowering species and varieties of coleus.

Growing coleus in the garden

The coleus plant is popular not only because it is beautiful, but also because it is easy to take care of. And most importantly, the indoor coleus plant can be grown in gardens with equal success. The coleus is perfectly propagated by seed, especially since you can easily find fine English and Dutch varieties on sale today. Sow the coleus best at the end of March. It can be done at other times of the year, but then you will have to organize additional artificial lighting during winter or in autumn.

You will need fertile soil, but light, as a container it is best to use a flat box. Seeds of coleus spread on the surface of the soil is not heap, sprayed with a spray gun, not zadevaya, slightly “salted” with sand, covered with glass and placed in a warm, dusky place, further maintaining the soil in a greenhouse in a slightly moist state.

The germination of purchased seeds is very high and you can expect every seed to germinate. This will happen faster than you expect – as early as the seventh to tenth day, and as soon as the first shoots appear, remove the glass and move the greenhouse to a bright east or west window, protecting the sprouts from direct sunlight. The temperature should now be 17-19 ºC. 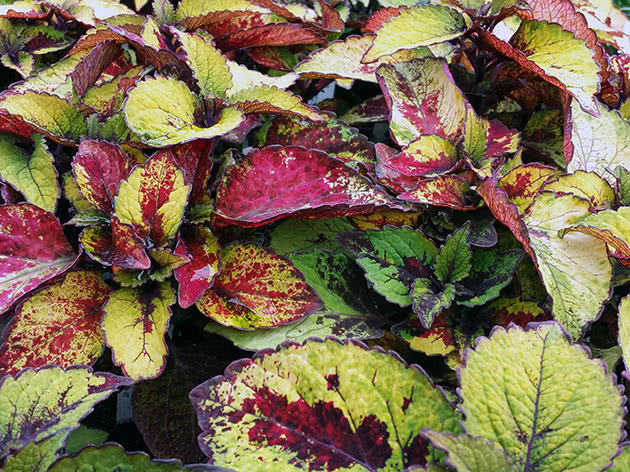 At the age of 3-4 weeks, when the seedlings have the first pair of true leaves, they need to be transplanted into special cassettes so that they can develop a strong root system, able not to be injured when transplanted into the ground. And when the young coleus are 5-6 weeks old, transplant each into a four-ounce cup and pinch to stimulate tillering.

Do not plant coleus in garden soil until after the final warm days have arrived. Choose an area that is brightly lit but slightly shaded at midday and protected from the wind, dig holes, add fertile, water- and air-permeable substrate, and plant the coleus bushes from cups in the holes. Planting coleus does not require any special knowledge or skills.

If you grow it as an annual – even more so. And even if you are planning to turn it into a perennial, you will hardly succeed – after two or three years you will have to grow a new coleus from seeds or cuttings, and secondly you will have to dig it out for the winter and bring it inside to plant it out again in spring. So simply plant the coleus bushes at a small distance from each other and do not forget to water them after planting. 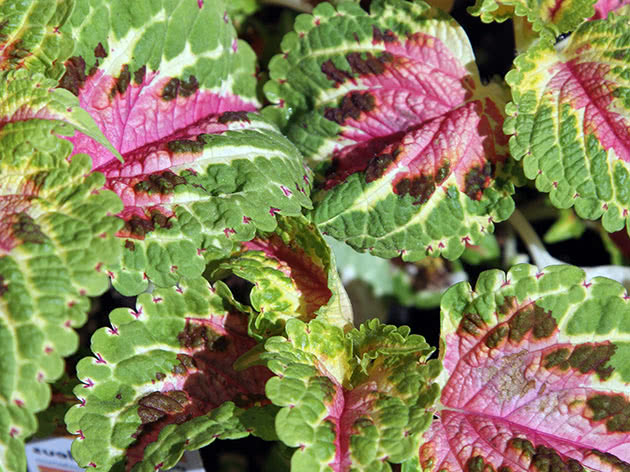 In the photo: Beautiful coleus leaves

Care for the coleus

The care of the coleus involves, first of all, abundant watering, especially in the summer dryness. Watering preferably with tap water, for which it is a good idea to have a barrel or tub in the garden, which will retain tap water or rainwater accumulation. Loosen the soil after watering and remove weeds. Two or three times during the summer, lightly mow your beauty to make it bush stronger. 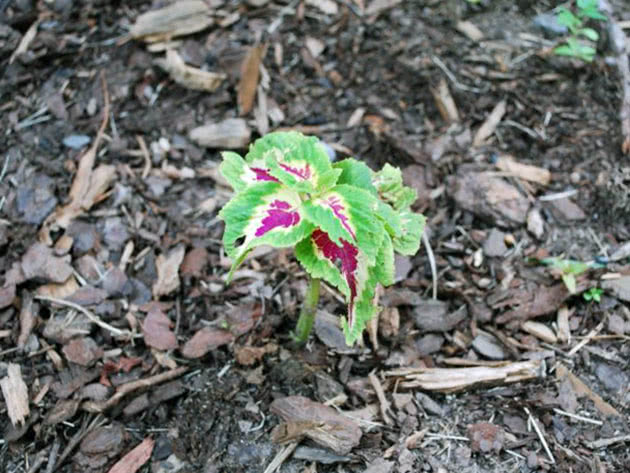 In the photo: Coleus in the open ground

Feeding during the period of active growth should be carried out weekly with fertilizers with a high nitrogen content, to stimulate leaf growth and not provoke early flowering. When flowering does come, remove the flower stalks immediately so they don’t take away from the coleus. That’s all the tricks. As you can see, growing coleus in the garden is nothing complicated.

Growing on a windowsill

The indoor coleus, as well as the garden coleus, is propagated by seeds and cuttings. Propagation of indoor coleus by seeds is exactly the same as in the garden one: seeds are sown, and when seedlings appear, they are picked in cassettes, and during the second picking the seedling is planted in a permanent pot. Everything is simple, and almost the same as in the seed propagation of the coleus garden. And now we will tell you how to grow coleus from cuttings. 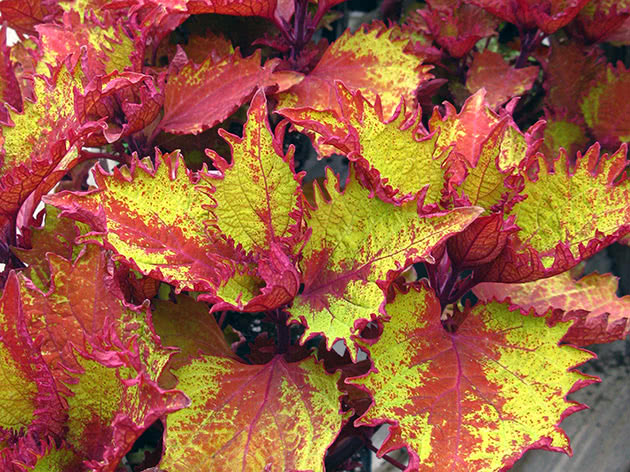 In the photo: Coleus / Coleus Henna

When you cut the coleus, you are left with pieces that you can use for cuttings. The cutting should be about 10 centimeters long. You should remove the leaves from its lower part and stick it into some damp earth or sand, cover it with plastic wrap or a plastic bottle and keep it in the shade at 18-20 ºC. The roots will appear in 8-10 days, and you can immediately transplant the cuttings to a permanent place. This type of propagation is as simple as it is reliable.

In this matter, too, there are no difficulties: abundant watering with soft, tempered water at room temperature, especially in the spring and summer period – the most important point. Fertilize room coleus, too, weekly in spring and summer complex fertilizer in half the dose of the specified rate manufacturers. In winter, fertilize the coleus once a month. 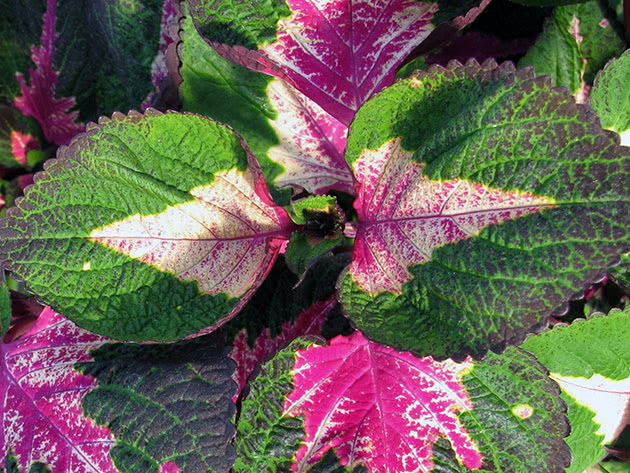 In the warm season regular spraying of the plant is desirable, but not under the sunlight, and in the shade, and in winter in a heated room to maintain humidity in another way – keeping the pot with coleus on the pallet with wet clay pebbles. Be sure to remove the resulting buds if your coleus is not of the ornamental type, so that the development of flowers does not take away the strength of the plant.

During the period of active growth the coleus needs to be pruned many times to stimulate branching, and after the rest before the new season you should cut all shoots to a height of 5-7 cm to rejuvenate the plant. Experienced florists plant cuttings for rooting just in case the last year’s coleus does not live up to expectations and still loses its decorativeness. 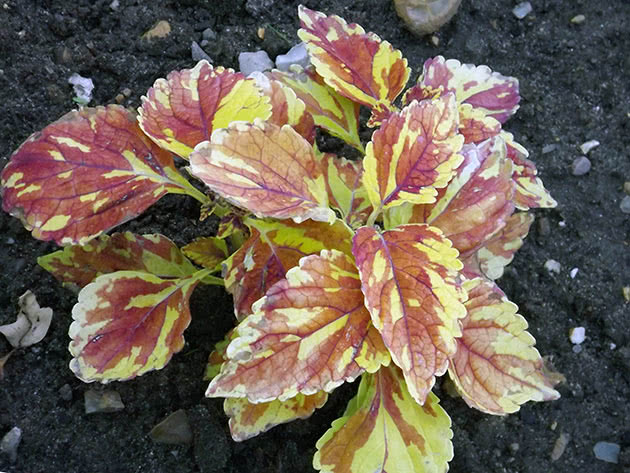 In the photo: Growing coleus in a bed

Diseases and their treatment

If you do not prune or cut a young plant in time, its shoots can greatly elongate. The same happens if your coleus has aged or if the young plant is dark. If the light is too bright, the coloration of the leaves becomes pale, discolored. If there is not enough watering, the plant loses its leaves, if it is overwatered, the leaves also fall off.

Of the pests dangerous to coleus aphids, spider mites and whiteflies. Aphids feed on the sap of the plant, causing damaged leaves to turn yellow and shrivel up, and are vectors of disease. You can fight it simply by treating the above-ground parts of the Coleus with soapy water and if some of the pests survive, you will need to repeat the treatment after a week. Do not forget to cover the soil in the pot with cling film before manipulation, so that soap does not get into it.

With garden coleus, this “detailed” method is too labor-intensive, so you will have to use insecticides. Aktellik and Fitoverm have proven themselves well in the fight against aphids. Mites cannot be taken with soap, so we recommend Oberon, Apollo, Agravertin or Acarin. Whiteflies can be killed with the same preparations as aphids: Actellic, Actara, Oberon, etc. 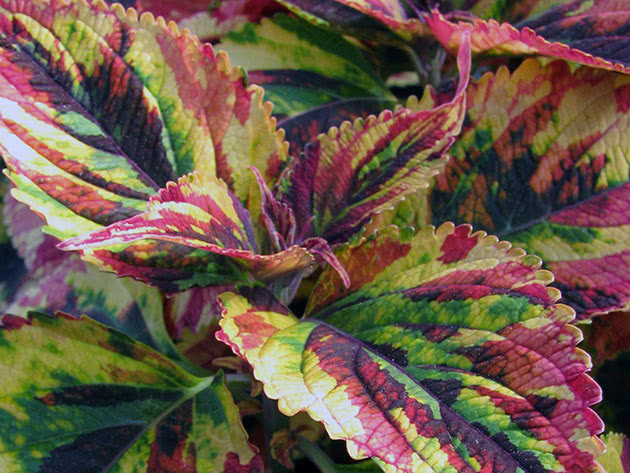 But the use of insecticides does not add to the health of the plants, so as a preventive measure, follow the simple rules of care for coleus, and such troubles as diseases and pests will bypass you.

As already mentioned, the garden coleus is most often grown as an annual. If you’re sorry to part with it, dig up the bush, transplant it into a pot, bring it inside and take care of it as a houseplant: gradually reduce watering by winter, and fertilize once a month. This is also how you should take care of your indoor coleus. During the winter, in addition to reducing watering, you should also reduce the temperature of the coleus to 8-15 ºC. 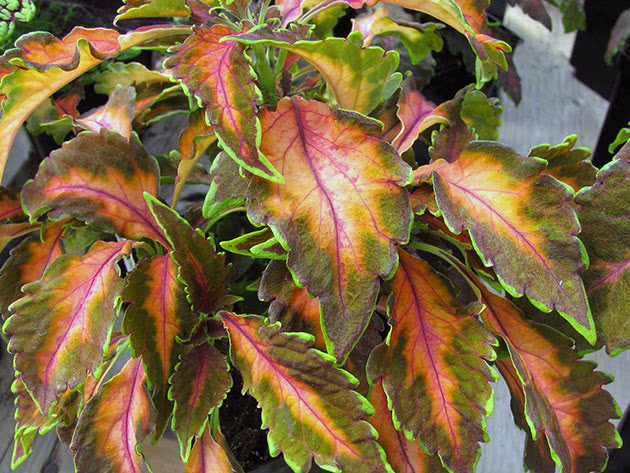 In indoor floriculture, as a rule, the Coleus hybrid is grown – the plant is not very large and quite unpretentious. The height of the Coleus hybrid reaches one meter, the stem has a square cross-section. The leaves are elongate-oval with serrated edges. Depending on whether the plant is in the shade or in the sun, the color of the leaves can be green or burgundy, respectively. 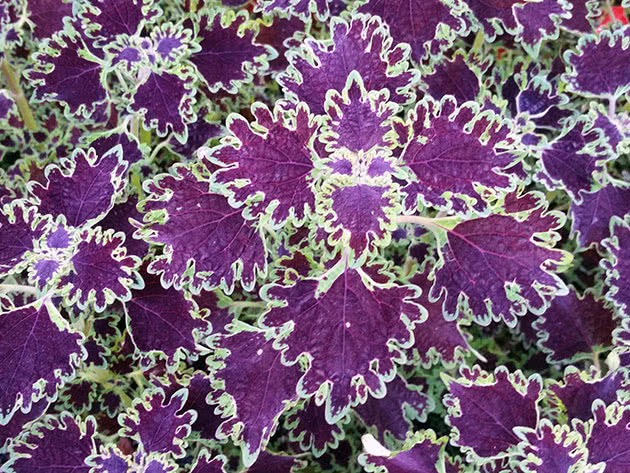 As an ornamental ampelic plant, Coleus rehneltianus is grown from Sri Lanka with shoots up to 50 cm long. Leaves of this species are opposite, on long petioles, wide-cordate with wavy edges, decorated with colorful veins – yellow, purple, brown, red … 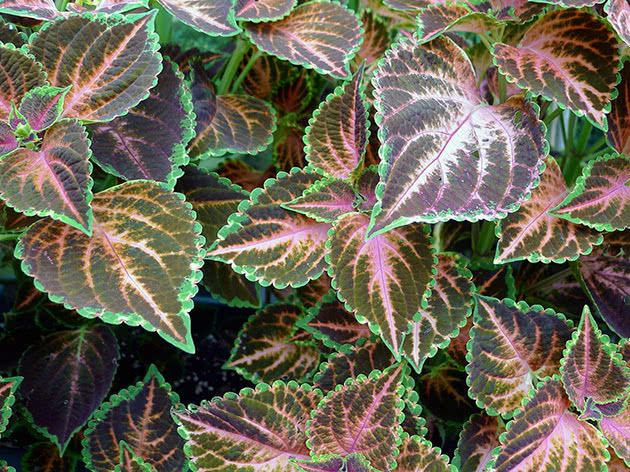 In the photo: Shrub coleus

But the most popular among florists is Coleus blumeii and its many varieties. The homeland of Coleus blumeii is Southeast Asia. It is a semi-shrub with shoots with articulate at the base, up to 80 cm in height. The best varieties: Black dragon – brown-violet leaves fluted at the edges with red streaks; hybrids of the series Wizzard – coleus Wizzard Gold with yellow-salad leaves, Wizzard Evening Dawn with fiery red leaves and a narrow greenish border, Wizzard Nephrite with a wide green border on white leaves.

Among the huge variety of coleus varieties, you are sure to find several species that you will be happy to decorate your garden and your home with.