Calla: Growing in the garden and at home

Home » Plants » Garden Plants » Calla: Growing in the garden and at home 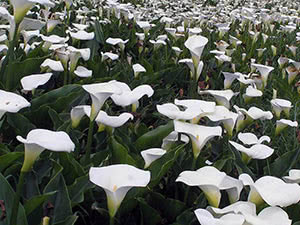 Many calla lovers do not even know that its characteristic elegant snow-white or bright colored “dollops” are not flowers at all, but… special leaves-covers that wrap the yellow cobs of inflorescences. Calla flowers inconspicuously, but very fragrantly!

More secrets of the exotic beauty reveal in our article.

Let’s figure it out together.

Planting and care of calla lilies

Calla, or Zantedeschia, is a genus of perennial plants in the Aroideae family. It grows in damp places in South America and Africa, from Nigeria to Tanzania. It is a relative of such a plant as whitefly, or calla marsh, the only representative of its genus, the range of which is located in the Northern Hemisphere. Zantedeschia is sometimes called Ethiopian calla, or richardia. The flower got its name “zantedeschia” from the German botanist Kurt Sprengel, who named it after his friend the Italian botanist Giovanni Zantedeschi, but most often zantedeschia is still called just call calla. The appeal of this plant to florists is not only in the very large spectacular leaves and the unusual shape of the flower, but also in the fact that you can grow calla in the garden and at home, in a pot.

Growing calla lilies, as well as any other plant, involves following the rules of agrotechnics, the main feature of these flowers is that they are grown both as garden calla lilies – in yards, and in apartments, in pots, as indoor calla lilies. But the general rules of growing and caring for calla lilies, wherever they grow, still exist:

Calla lilies are so decorative in the garden with their majestic flowers that many flower growers enjoy growing them in their household. Glades where calla lilies grow look like an Arabian ornamental painting: the rhizomes produce young sprouts of leaves every year, and elegant arrow-shaped flower stalks rise up among them… 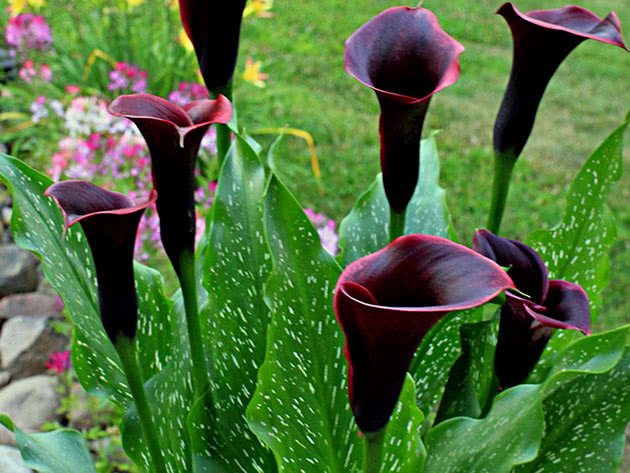 Calla lilies prefer open spacious areas and fertile soils, but it is advisable to shade them in the hottest hours of the day: in the scorching sun the leaves wither, burn and dry out, so it is important that bushes or trees grow nearby, which will give the Calla a saving shade in the afternoons. The soil must be acidic or at least slightly acidic and there must be good drainage because stagnant water in the roots is fatal for the plant.

Calla plants and care in the garden

Planting garden calla lilies in early May. Pre-planting material is kept for half an hour in a solution of manganese, then carefully inspected and, if necessary, cut out the rotten places to healthy tissues, and the wounds are lubricated with greenish. In the soil on the site of the complex mineral fertilizer at the rate of 30-40 g per 1 m ², plow over the area. Then the tubers are immersed in the prepared holes to a depth of 5-10 cm at a distance of 30-40 cm from each other (depending on the size of the bulb), bury, and planting place well watered.

Calla, if you remember, has a peculiarity: it does not sprout until it forms an underground part, so if you are lucky, you will see sprouts in two weeks, and if you are not so lucky, then in a month. Don’t get discouraged and try to dig out the hole and see what stage the process is at. Do not water the calla lilies for the first two weeks: watering after planting is sufficient. 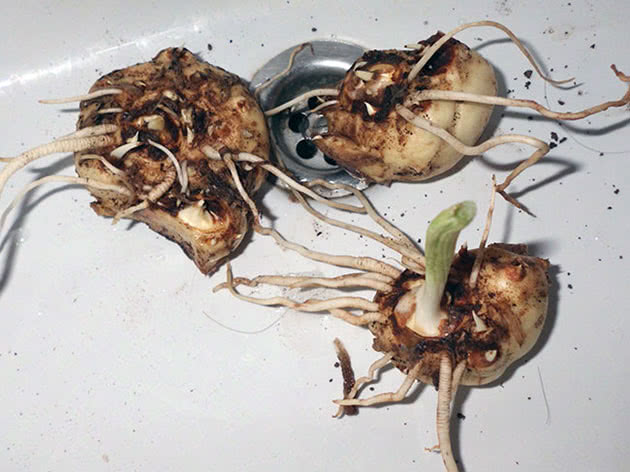 Planting calla plants in the fall is not carried out.

Care of the garden calla

How to take care of a calla lily? It turns out, very simple. Watering the calla, followed by loosening is all that is needed for its normal growth. Water the plants moderately but regularly, increasing the amount of water during hot, dry summers.

After each watering you should lightly loosen the soil around the plants.

If you applied fertiliser to the soil when planting, you won’t need to fertilise the calla lily again. Sometimes, if the soil is not acidic enough, just water it with citric acid or vinegar.

Home calla plants can be grown at 22-25ºC in the summer and at least 14ºC in the winter. The place for the plant should be well-lit, but shaded from direct sunlight in the afternoon and protected from draughts. Soil for calla plants at home should be about ph 6-6 acidity and you can add sphagnum moss or peat with sawdust to the soil. The tuber for calla bunting should be about 6 cm in diameter, it is planted convex side down in a container at least 25 cm in diameter, the depth of planting is 5 cm. After planting the tuber, the soil should be sprinkled with a fungicide solution.

Caring for home calla is no more difficult than for the garden calla. Water the planted tuber should be carefully, so that it does not rot, so it does not sprout. If you want to get early flowering and get the brightest possible color covering, you can resort to this trick: At night the temperature for the calla lily is lowered to 16 ºC, and during the day provide the brightest possible light, but without direct sunlight, and if the calla lily is used in winter, it will need additional lighting with fluorescent lamps so that the day light for it lasts at least 10 hours.

Fertilize the calla lily with a balanced liquid fertilizer, such as Kemira-Lux. Fertilize the soil with water every fifth watering of the plant. 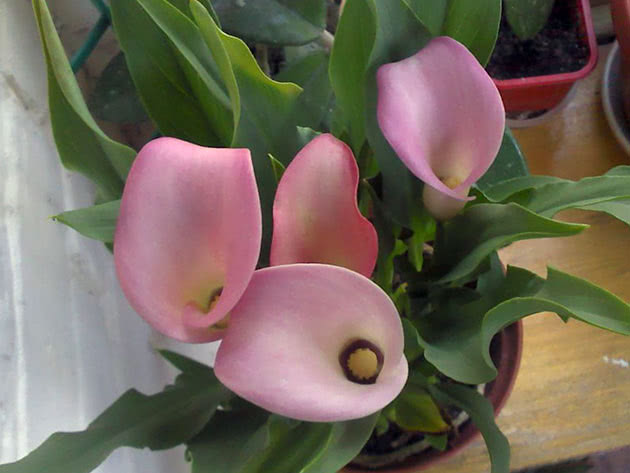 Calla is propagated by seeds (this method is unreliable, and the result will have to wait a very long time), tubers and bush division. Multiplication of calla by dividing the bush is as follows: in the fall, when digging up the calla offspring with part of the rhizome and transplant it into a pot of earth mixture, and in the spring transplant it into the open ground. If only the Ethiopian calla and its varieties are propagated by bush division, the other Calla are propagated by tubers: the tubers are dug out in the fall, stored for the whole winter, and in spring are planted in the open ground. 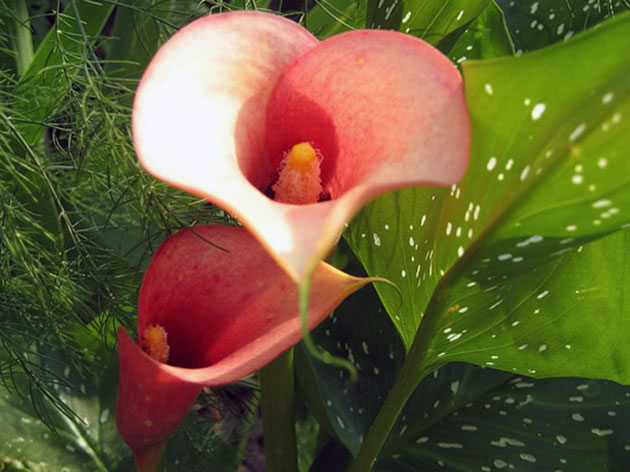 In the photo: growing calla lilies at home

The care of tuberous calla lilies and rhizomatous calla lilies has differences. In the Ethiopian, rhizomatous calla, the dormancy period comes in the very heat – at this time, growth slows down, then stops, the calla turns yellow… During this time, watering should be reduced and the plant should be taken out onto a balcony or into the garden in a well-lit place where it can’t get a drop of rain. In the first half of July remove the plant from its pot, remove all the old leaves and shoots and transfer it to a pot with a new nutrient mixture, place it in a bright place and start watering and feeding it, preparing it for the next bloom. This is the cycle of the rhizomatous potted calla.

Garden calla remains in the plot until autumn, in September, the rhizomes are dug up and stored with an earthy clump in a cool dry room with moderate infrequent watering.

In the photo: Calla in a pot

In tuber Calla after flowering, the covers gradually turn green and droop, the leaves turn yellow and dry out. Garden tuberous Calla are dug out carefully in the third decade of September, taking care not to damage the tubers, free from soil, washed and kept for a couple of weeks at 5-10 ºC, waiting for useful nutrients to migrate from the leaves to the tubers. Afterwards, the dead leaves can be easily removed.

Storing calla lilies for the winter

In our latitudes calla lilies are not left in the ground for the winter. When the leaves die, remove them, tubers well washed, kept 30 minutes in a solution of manganese, washed again and put in a dark dry place to dry, then store the tubers, packed in paper bags, at 5-7 ºC: in a city apartment for this vegetable crates in the fridge. 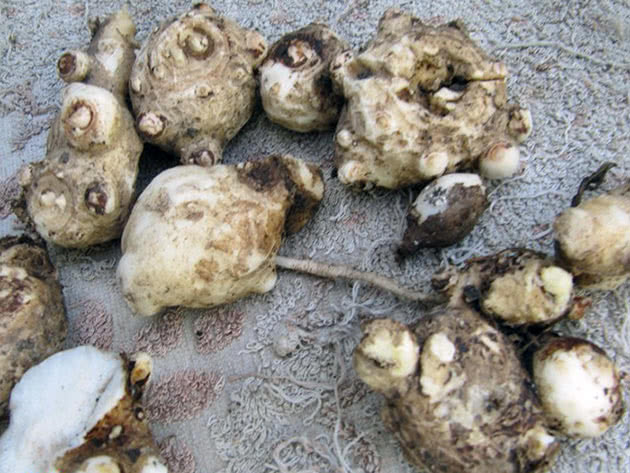 In the photo: Calla tubers

The rhizomes of an Ethiopian calla, if you don’t have the opportunity to keep them in a cool room after digging, dry them slightly and, having cut the leaves, store them in the same way as the tubers.

Do not forget to check on a weekly basis how the tubers and rhizomes of calla lilies feel: whether they have begun to dry out and wrinkle from too warm temperatures or, conversely, rot from high humidity.

If you grew the calla lily in a pot, you can not take it out of the pot for the dormancy period, but simply take it out on a cool veranda or loggia. If you, without giving your beauty a couple of months of rest, continue to water and provoke further growth in every way, you can deplete the calla and it will not bloom.

There are only eight species of calla lilies in the genus, but only three are grown in culture, and they also served as material for breeders in the development of different varieties:

This is a tall white calla (flower stalks – up to a meter or more in height), the underground part is a rhizome, not a bulb, as in other species. The Ethiopian calla is moisture-loving, and it does not shed its large, shiny green leaves even during dormancy. The most popular varieties are: 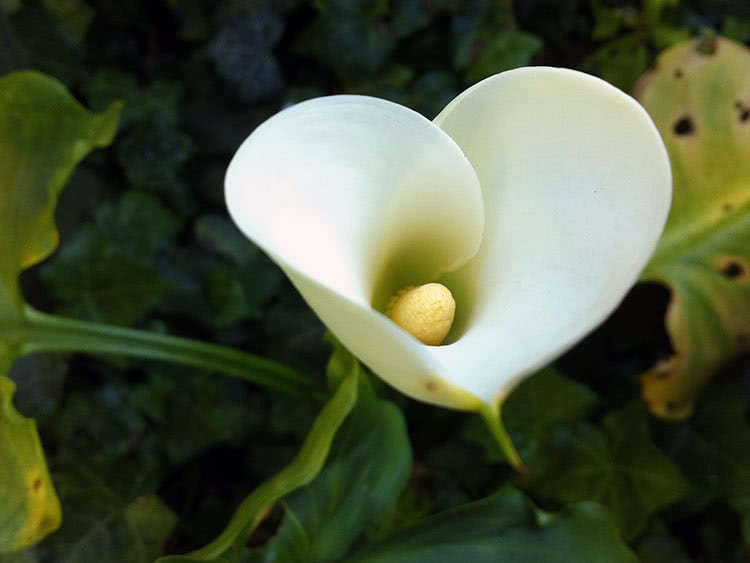 This is a short calla (up to 70 cm tall) with a cover of pink (lilac-burgundy or red-pink) and narrow green leaves. The underground part of the plant is a tuber, similar to the tuber of a begonia or gloxinia. It loses its leaves in the fall and requires dormancy during the winter. Popular varieties: 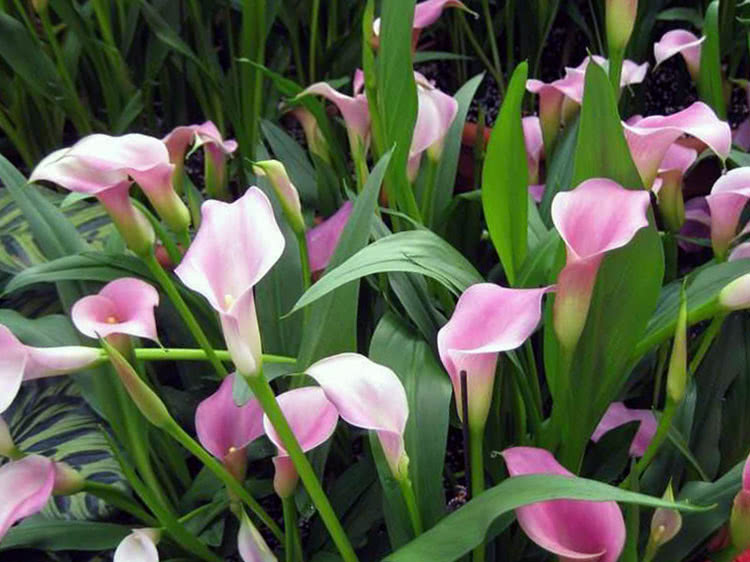 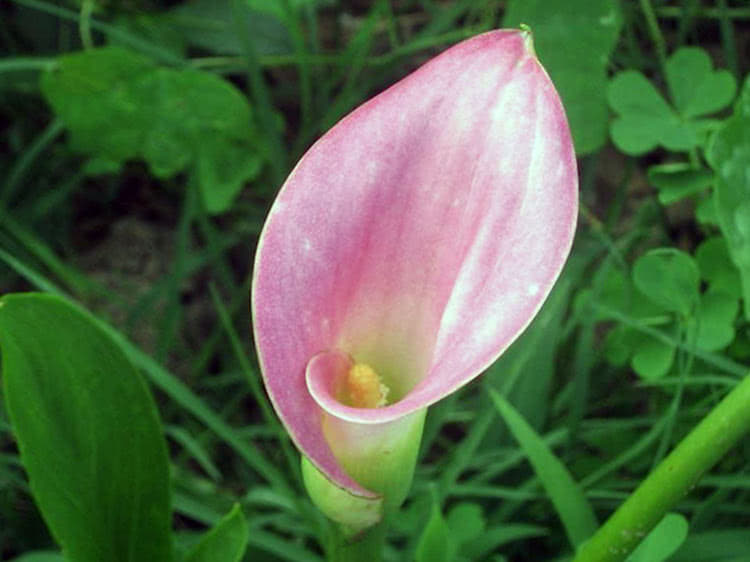 This is a calla with large green mottled heart-shaped leaves. The cover is yellow-green on the outside and yellow on the inside. It reaches 50 cm in height. Varieties: 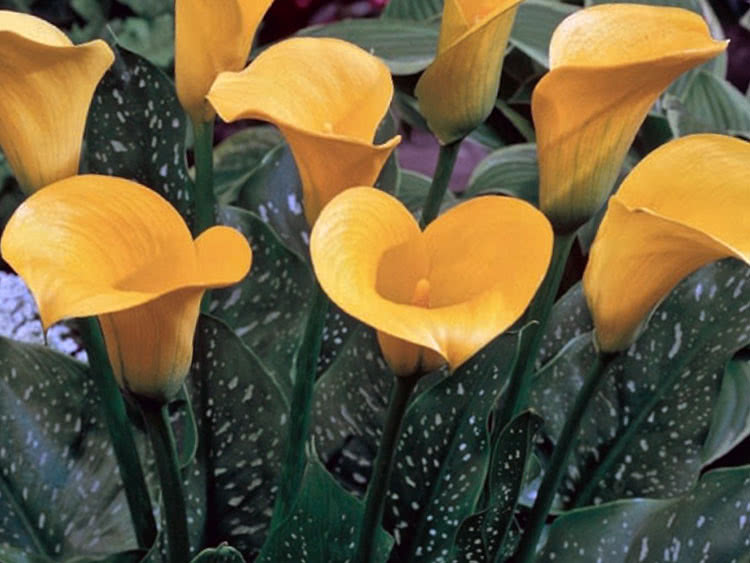 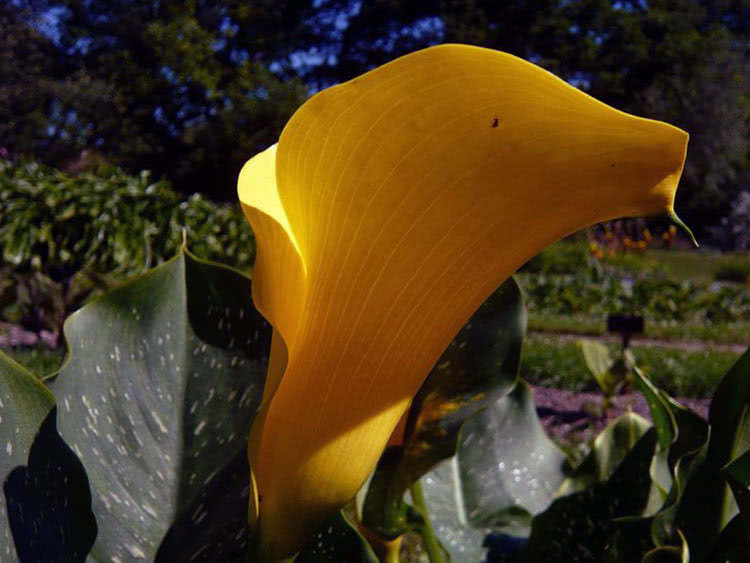